Vicenza is mostly traveled by on foot. The size of the town allows for quick access between destinations. This however, cannot be said for the newer areas of Vicenza, disjointed and suburban they are extremely cut off from the UNESCO protected historic center.

A New Piazza for Vicenza

Vicenza, Italy -  A Veneto epicenter once home to the Architect, Andrea Palladio, the town hosts numerous Palladian projects displaying his architectural pioneering of the mid 1500's. Palazzo Cheoricati, designed by Palladio, is one of the anchoring landmarks of the town, displaying valuable art and iconographies of Vicenza's rich Venetian influences. Uniquely, the Palazzo sits atop Roman Ruins, remnants that can be visited today through public cellar access in the building. In front of this layered artifact, is the Piazza Matteoti, which has become, respectfully, a neglected Piazza victimized by a growing parking lot to it's southwest corner. 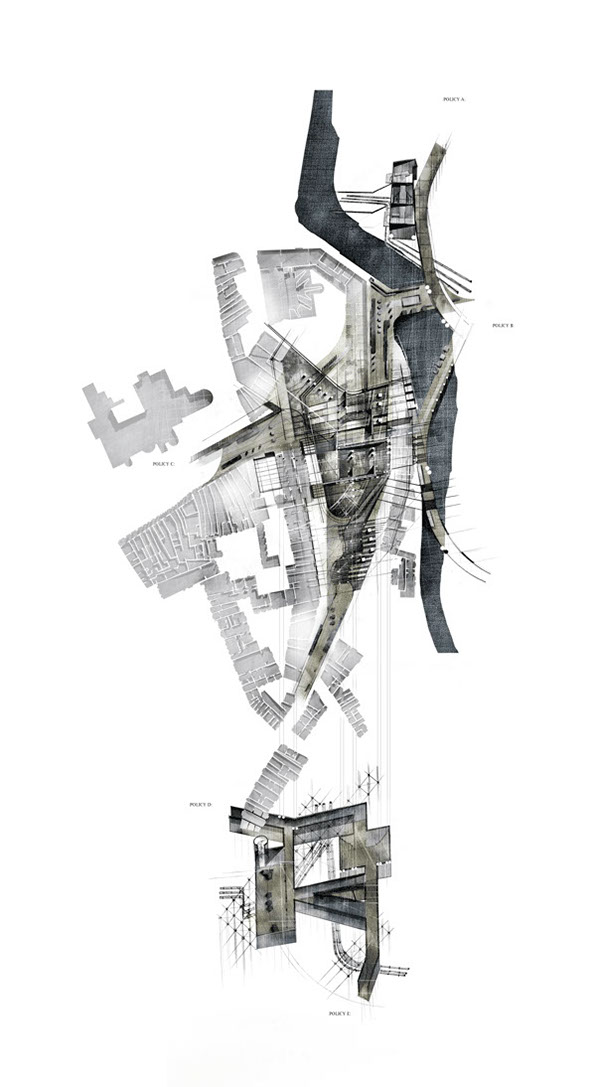 Although the parking lot provides for many commuters living outside of the city center's limits, it raises a conversation surrounding a potential facilitation of improved public transit. Mutually beneficial to user and town, the Piazza could be reclaimed as public lawn. 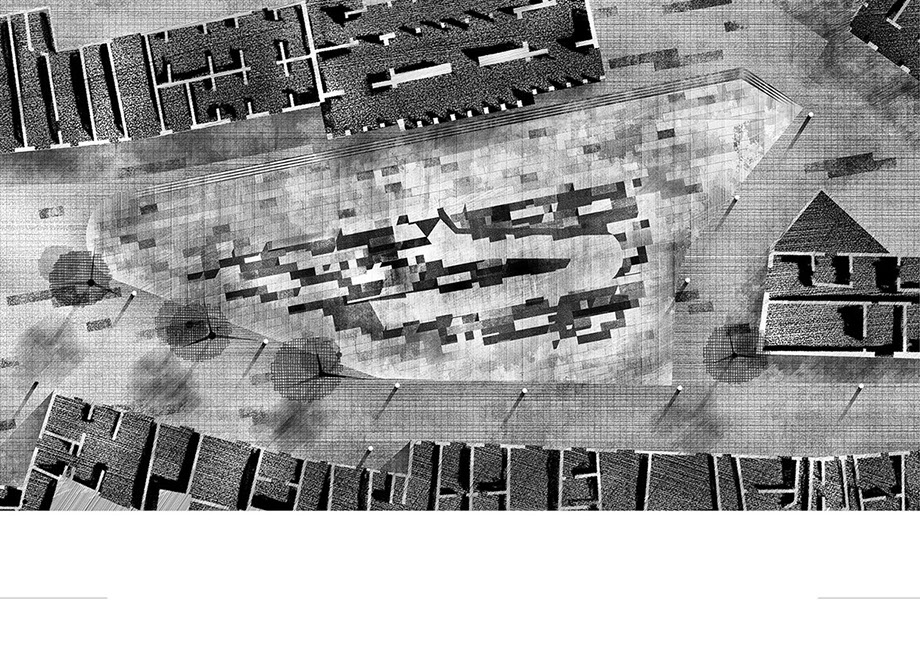 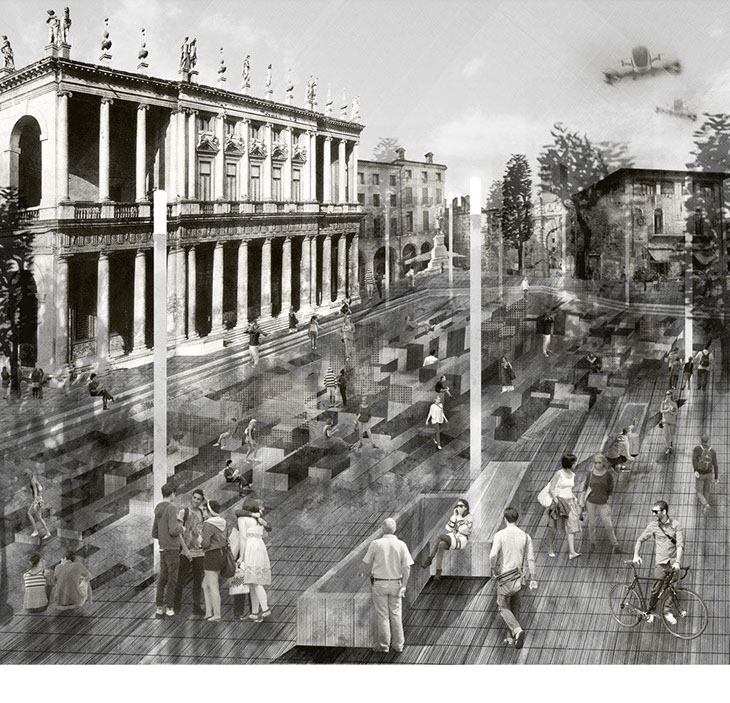 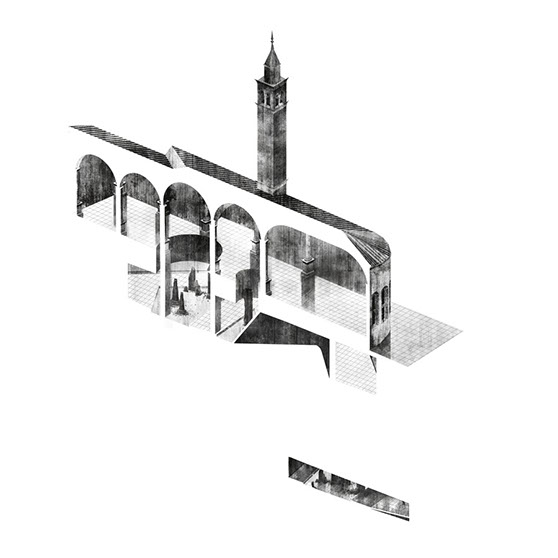 Hidden within these blocks, is another potential answer to the palimpsestuous nature of Italian development - ruin discovery during construction. Weaving a ramp between the Piazza's blocks from ground level to below grade, a path connects ruins found underground to ground level, celebrating the layered time line of Vicenza's former Roman self. The path serves as a ligature from the Cheoricati to the ruins beneath Santa Corona, all with the possibility of expanding this network upon excavating additional below ground relics.

When using these polarizing time lines and intersecting them through a series of interrogations pertaining to the future of historic sites, preservation inclines design to be strategic. Developing a filter for items of historic or visual importance protest initial design tendencies, promoting strategic removal or re-framing of context. Can these relics, artifacts or buildings be reborn or reused once again as helpful forms of infrastructure and culture? 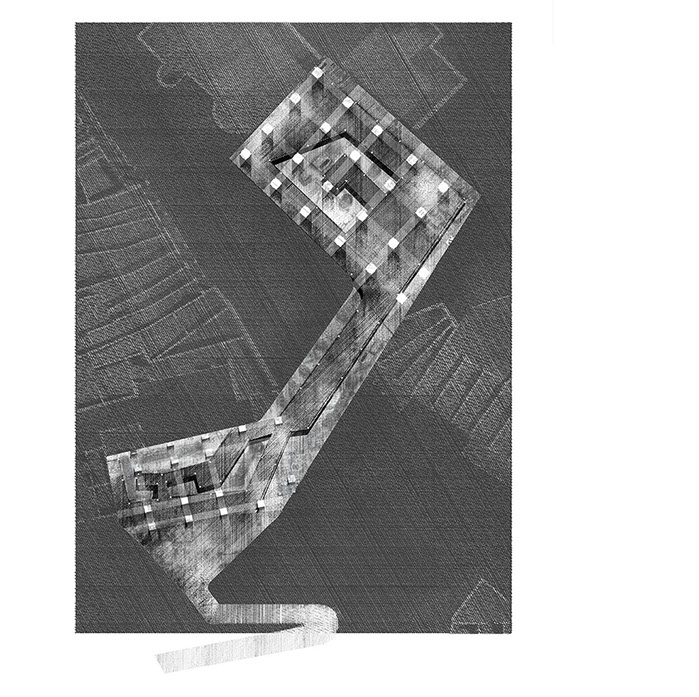 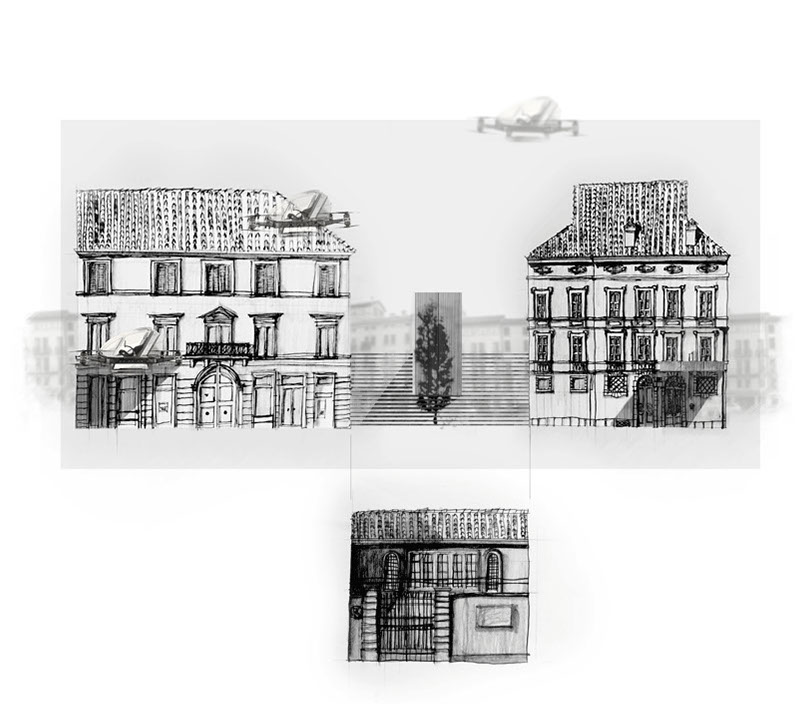 Envisioning this new mode of movement from suburb to center, users take a drone bus to their final destination. While the design of the bus is still imagination, the designing of station in the context of the Piazza informs this potential. Reusing an abandoned building on the Piazza, windows become platforms for the bus to land. Internally, a structure connects these platforms to the ground while remaining independent of  the preserved exoskeleton of the building. In doing so,  a vestige of past architectural ventures is displayed to commuters. 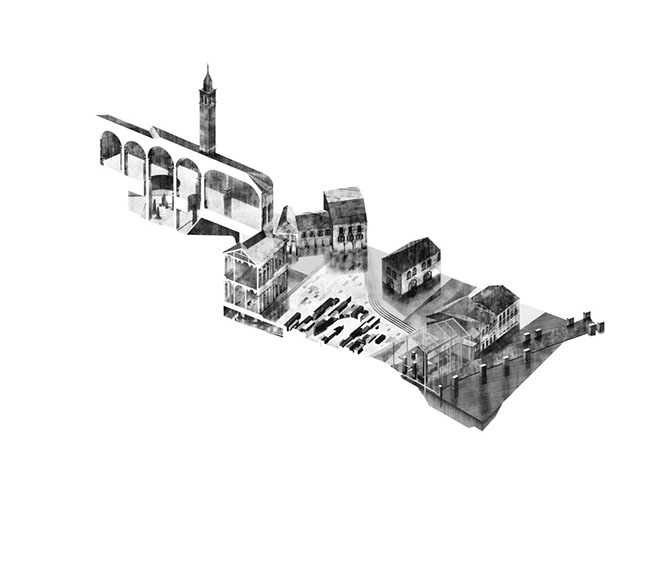 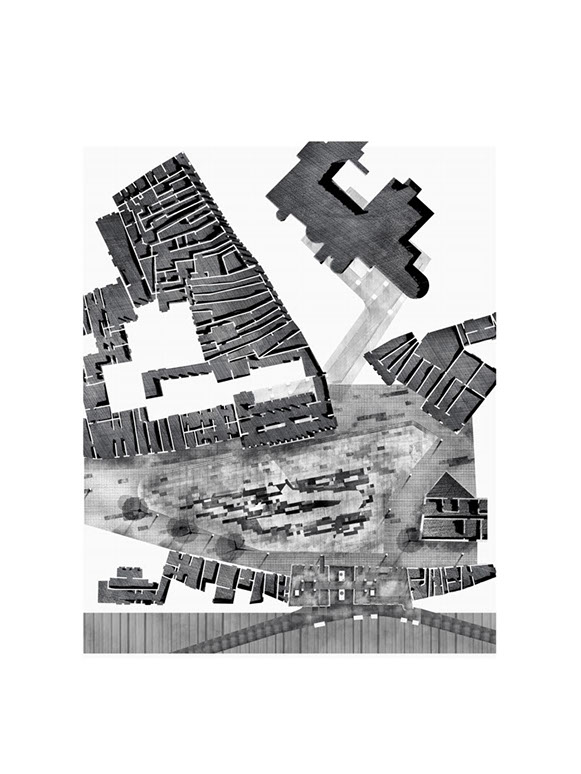 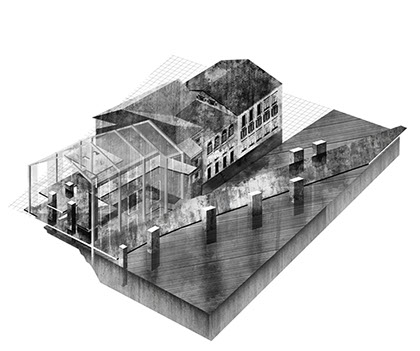 As historic time lines give depth to research within the site and town, it was relevant to envision future layers that parallel the slow, careful constructions of Vicenza. Imagining a transit system for one hundred years into the future, the curating of a drone transportation system allows for  unobtrusive methods to arrive in the city center. If traffic is aerial, Piazza's can once again be gifted to pedestrians. 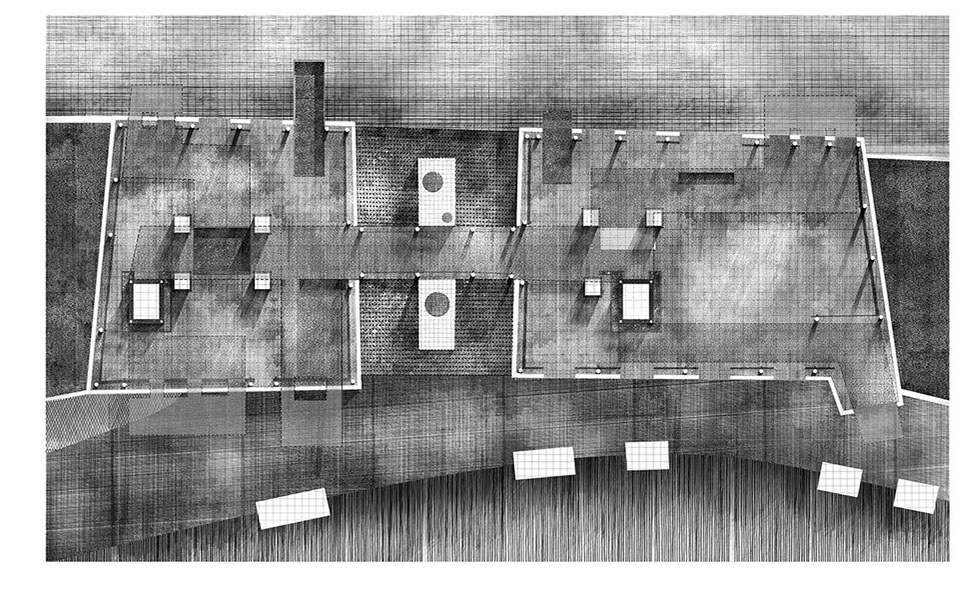 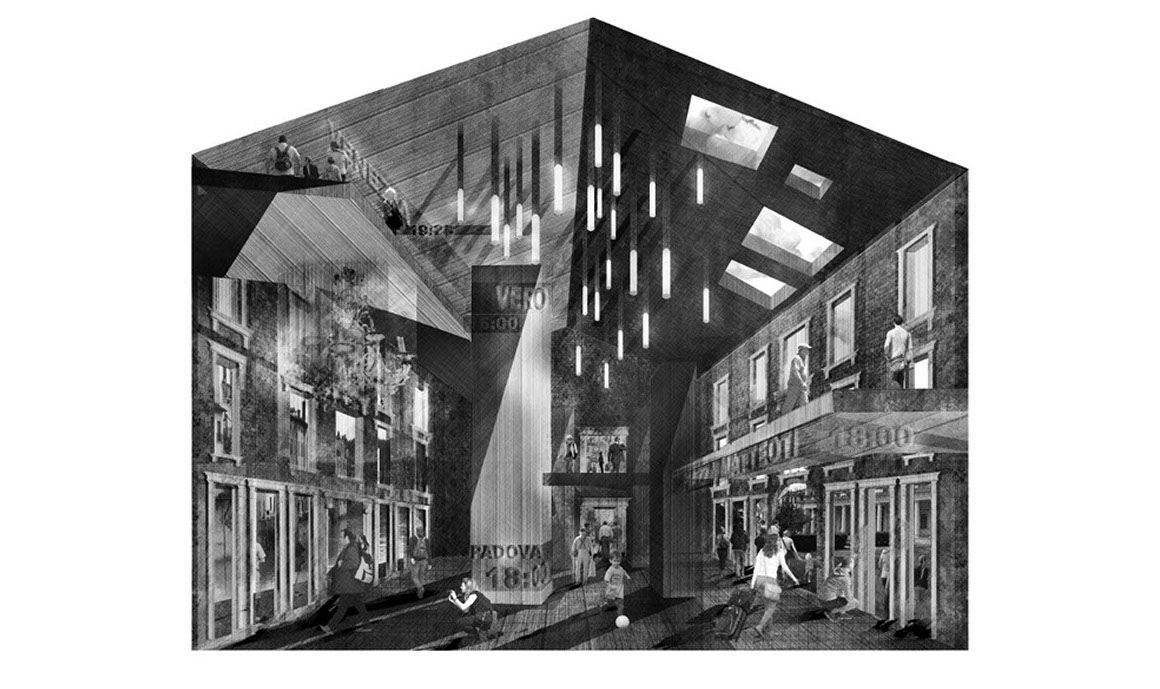 When exiting the station, visitors are taken down steps that can connect them, optionally, to other parts of the city along the Bacchiglione, or directly into the Piazza.

The Piazza interrogates the traditional perimeter arrangement of people around an open center, by challenging this with an inversion that places activity at the nucleus of the Piazza. Doing this through a staggering of miniature blocks, establishes a new typology of urban furniture allowing clear distinctions between trajectory traffic and leisure.

Johnathon Smith. All Rights Reserved. With proper credit, drawings may be re-posted, Work may not be printed, modified, re-branded or re-distributed without permission.