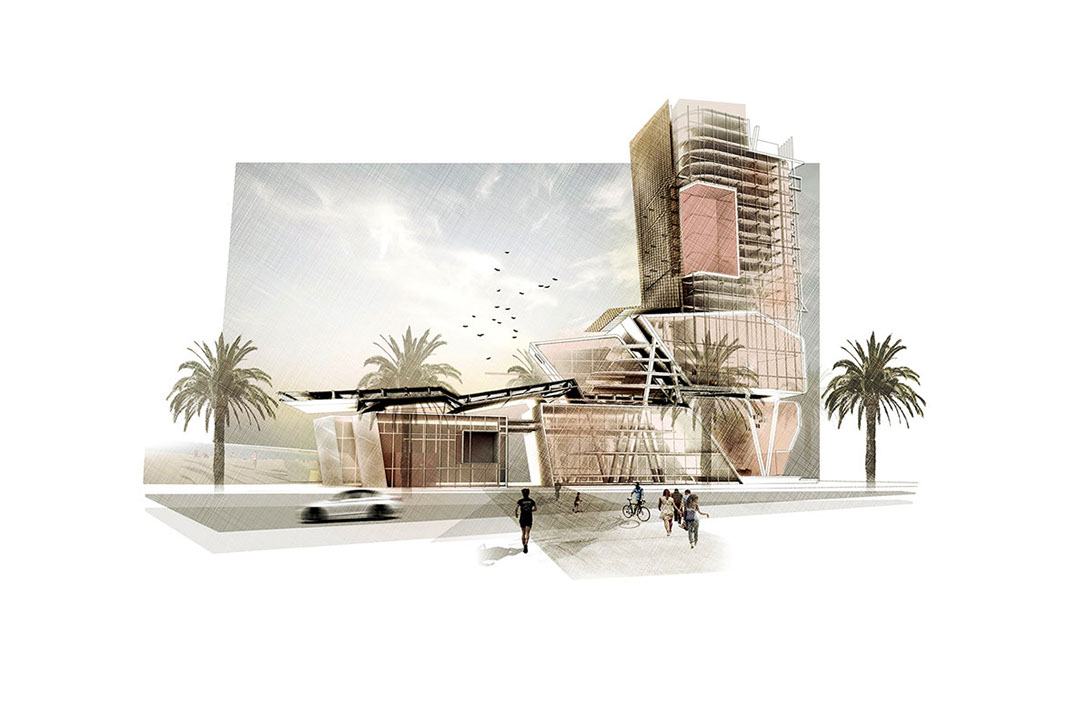 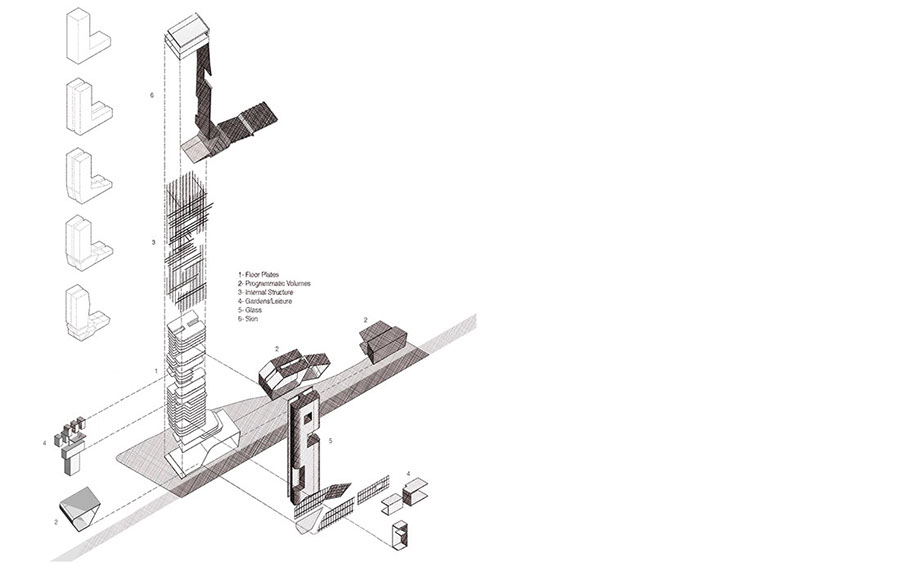 Using this history as a conceptual layer in developing a hotel, it was important to recognize the regeneration and positive reuse of the area. What does regenerative mean in the context of interaction from person to person and person to city? Are there necessary components of community development that are exclusive to temporary company? Producing a sector of this plan that allows for  commingled events and activities that engage both transient and permanence promote the generation and spread of visiting culture while providing residents with a vestige of past relics from these times. The creation of an art gallery commending the production and participation of art anchors the concept of the hotel in the bygone of Vila Olimpica. 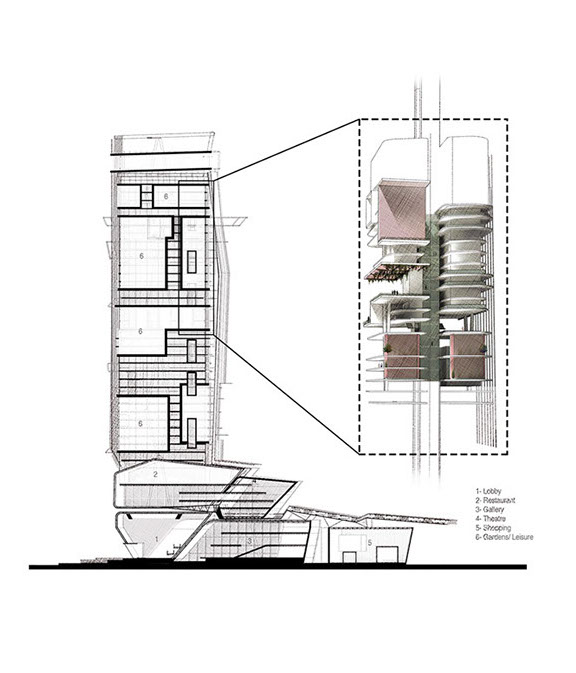 The Main Gallery is composed of three floors with entry from the ground level of the marina, conducting traffic in from the public and serving as medium for  visitors descending the tower. The gestures of the gallery are reactions to the 500’ - 0" tower that gain angular qualities in order to reflect the sky, closer to the tower's base. From here, the tower carves away at itself nodding in function to the plazas of Barcelona. Through the surgical placement of openings and walkways, users apprehend the mixture of activities found at street level. Gardens, sand pits and urban furniture line the openings, allowing the tower to mimic a blend and passing of the once again, transient and permanent. 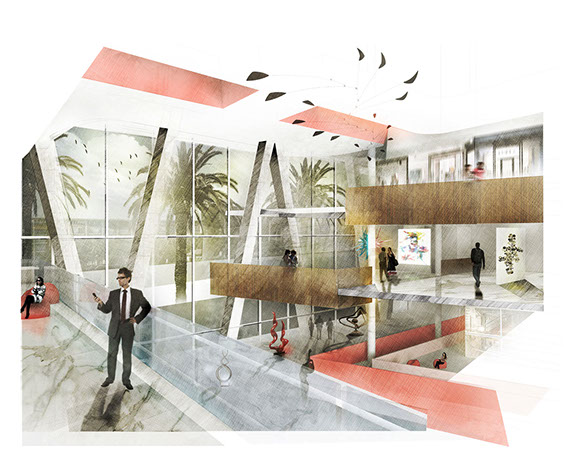 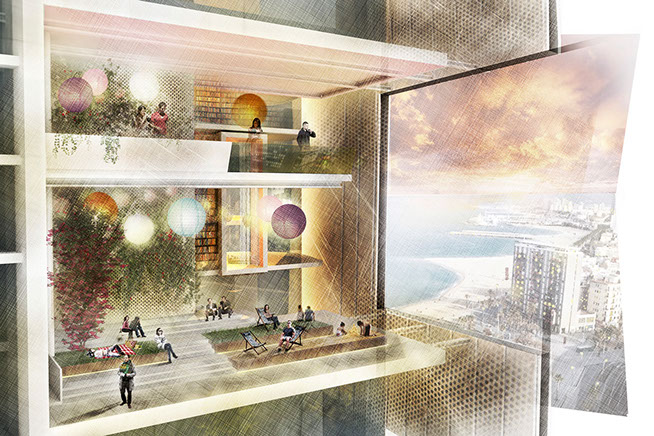 Johnathon Smith. All Rights Reserved. With proper credit, drawings may be re-posted, Work may not be printed, modified, re-branded or re-distributed without permission. 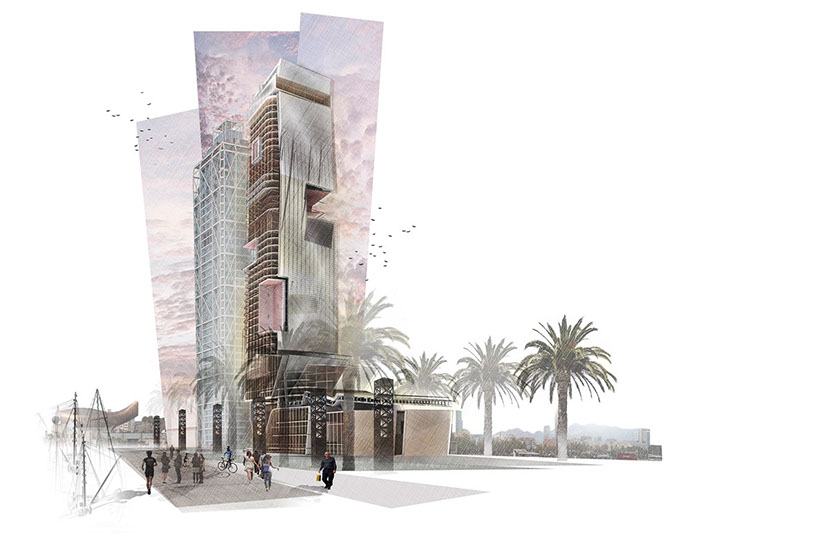 Barcelona, Spain - A city with a past that dates back to the age of the Romans, is a center for art, culture, fashion and leisure for a multitude of visitors from around the world. The city was originally surrounded by a wall protecting and localizing the bounds of its borders until the 18th century when the grid began expanding beyond these perimeters. Barcelona grew exponentially after this period.

Designing in Vila Olimpica, a district within Barcelona, it was strategic to recognize that the area had been regenerated and reconstructed in preparation for the 1992 Olympic Games. In order to rid itself of its former industrial park past, architects and city planners created over 2,000 dwellings for both permanent and transient residence. During this revitalization planners forged a sandy beach along the water, serving both visitors and residents. Its close proximity to “Las Ramblas”, and many other cultural iconographies tied to Barcelona's expansion (post medieval times), allowed the district to thrive.